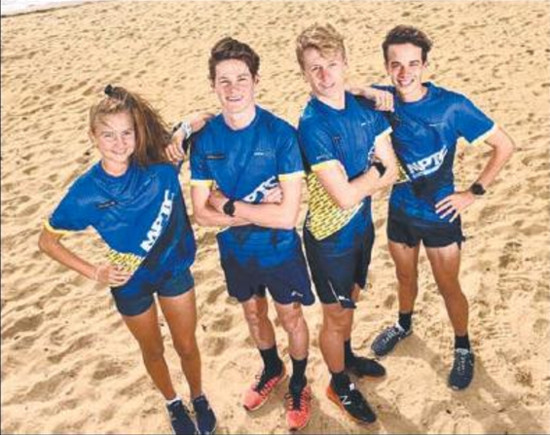 A SMALL but ambitious triathlon training group has hit the jackpot.
The group from Mornington Peninsula Triathlon Club set itself to get four of its members into the Victorian team for the Schools Triathlon Festival in Penrith, NSW, from April 18-21.
And, bingo, all four made it. Lachie Watson, James Sampson, Lily Van Raay and Oscar Riley will take their places among the nations’s best.
MPTC coach Kyle Burns was bursting with pride.
“We started a small performance group for younger kids who really want to take their triathlon somewhere,” he said. “We tried to get four into All Schools, and all four got in. That’s the highest representation out of any club.”
The group trains at Frankston Yacht Club, using the beach and nearby running and riding tracks to prepare.\Burns said all four young athletes were big on talent.
Commenting on each, he said:
Lily: “Super dedicated and just a good honest trainer who is starting to reap the rewards.”
James: “A bit older, is big on life saving as well. Getting great results in both.”
Oscar: “I call him my rough diamond, (he has) heaps of talent and will go far in the future, a natural talent.”
Lachie: “He’s only come into it this year and is doing really well, getting results already.”