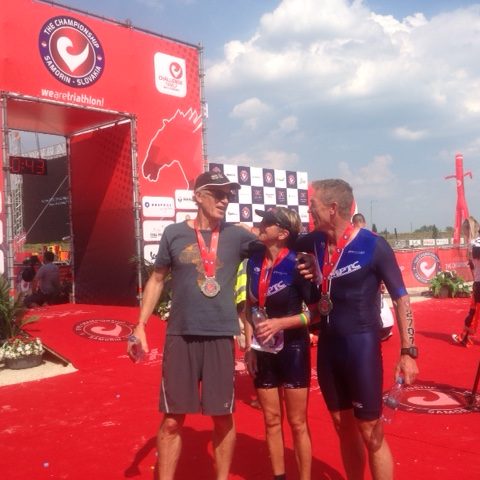 Thanks to a great performance at Challenge Shepparton by Shane Strachan, Rob Woodward, and Michelle Ruitenbeek an invitation was received to compete in the inaugural Challenge Champs at Samorin in Slovakia..

You all know where that is don’t you? Its where Skodas come from and it used to be half of Czechoslovakia until the velvet divorce in 1993 split it up. Population 5M capital Bratislava 500,000 (think size of Gold Coast) and in the Eurozone, social security and universal healthcare. Good country and good beer…..

Shane could not race so Julia Hebb suggested I consider subbing for Shane. I agreed as I had never been to Slovakia…..

We met in Bratislava having travelled separately. Rob was racing in Denmark one week later in the 70.3 (5.24 – well done Rob!).

Weather was fantastic and proximity to Budapest and Vienna meant lots of travelling between these places. Great value dinners and the facility for the race was brilliant:
http://www.x-bionicsphere.com/en/home

Swim in the Danube was 18c but water quality great and minimal current.

Rob Woodward powered through the bike in close to 2.30 and the recent surgery held Michelle back but she solidiered on in the heat and we got 4th place.

Venue was brilliant and after race facilities best I have seen.

What a shame its a 30 hour commute!