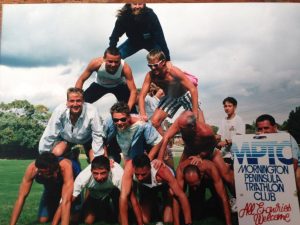 The Mornington Peninsula Triathlon Club (MPTC) was founded in 1986, and is one of Australia’s oldest and most respected triathlon clubs.   MPTC was commenced by a group of like-minded, interested people, such as Owen Johnston, Graham Musgrave, Ron Foster, Ken Jenkins and Graeme White.

Owen, Graham and Ron had sons of great triathlon potential.  Graham and the then 16 year old Andrew Johnson came up with the idea of the club on a cold Saturday afternoon ride in June 1986 out the back of Hastings.

Graeme White was the first president and Owen Johnson the Vice-President, while Owen’s wife Robin took on the role of Secretary.  The club was officially formed at a meeting held at the Police and Citizens Hall in Tower Road, Frankston, and it became incorporated on 27th October 1986.

It was in 1988 that MPTC found its present and permanent club rooms, which it rents from Frankston Council. The club has exclusive use of the building on a park in Williams Street, Frankston. The club currently has a membership of over 170 members and operates on a non-profit basis.   If you live anywhere from Frankston to Portsea then we are the club for you – come and join us now and swim, ride and run across the Peninsula.

30 years on, and 2017 saw us enter into an agreement with Frankston Yacht Club (FYC) to make a new sporting power hub in Frankston.  You will now find functions and training running out of the new clubrooms at Long Island Drive.