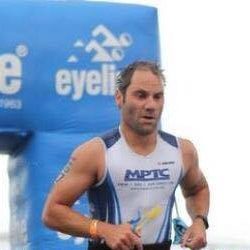 Andrew Johnston (AJ) – Andrew has been involved in triathlon for 33 years and is a founding member of the MPTC. It was actually his father Owen and founding Club President Graham White who established the Club and secured it’s Williams Street base. Andrew has participated in the sport continuously over this time and continues to push his increasingly busted up body to train and race… occasionally. With over 200 races under his belt, the standout event was Melbourne Ironman 2014.